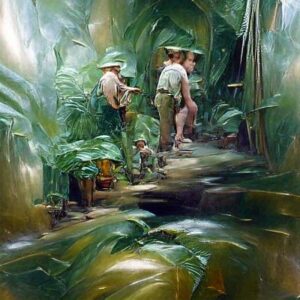 This game is an RPG. If you’re familiar with RPGs than feel free to move on. If not, let me explain what an RPG is. An RPG is a Role-Playing Game. In this particular game, you will create a character from scratch and assume this character’s identity while you play the game. There is no board except for the one you draw in your mind or keep track of on paper. There are many RPGs out there, but the one you’ve probably heard of more than other is Dungeons and Dragons. This game is similar to D&D only in that it uses polyhedral (multi-sided) dice and your imagination to play the game. 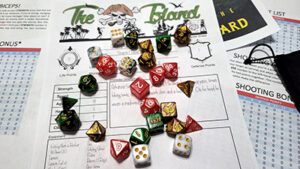 Let’s take a look at Polyhedral Dice so you’re familiar with them. Take a look at the picture to the left and you’ll see a bunch of multi-sided dice. I know you’re familiar with the standard 6-sided dice that is used in almost every board game. But less familiar to you, unless you are an RPG player, are the 4-sided, 8-sided, 10-sided, 12-sided, and the 20-sided. There is also a 100-sided that looks like a golf ball. I’m not kidding. But this game doesn’t need it. Looking at the chart below you’ll be able to see the differences. They come in a variety of colors and materials.

One of the great things about RPG games is that you HAVE to use your imagination and thinking skills to get you through the game, luck of the dice will only get you so far. Let me give you an example:

You’re surrounded by intelligent, carnivorous, blue spider monkeys. They are eyeing you cautiously. They seem to be waiting for you to do something. What do you do? Do you give them some of your rations? Do you draw a weapon and wave it menacingly? Do you try and communicate?

As a real person, you need to figure out what you would do in this situation. It enhances game play and makes it more fun for everyone. Also, you may come up with something that know one has thought of before and, due to your quick thinking, your group of intrepid treasure seeking explorers is saved!

In the game, there is a single, unique, arranger (almost a player unto himself) called the Game Master. They usually decide on the rules and setting to be used, while acting as the referee; each of the other players takes on the role of a single character.

The Game Master has a basic set of rules created by us called and “Adventure Guide” or they can create their own. The Adventure Guides are numbered so you can always download the latest one. Included in this PDF is Adventure Guide 001: Quest For The Gold Leopard. This guide includes a step-by-step guide to the adventure as well as charts for you to use for your dice rolls. 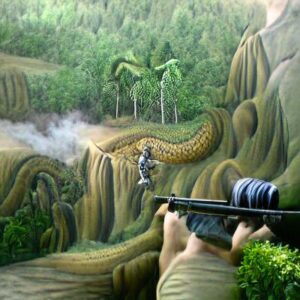 What do I mean by charts and why do you need them? Well, let’s say you’re running from a group of indigenous tribespeople that want you for dinner. One of them throws a rock at you. Based on your character’s AGILITY, you will need to roll a 20-sided dice to find out if you were agile enough to dodge the rock. If you were, awesome! If not, the Game Master, according to the chart must roll a 4-sided dice to figure out how much damage you took. The result of this roll will be subtracted from you “Life Points”. If the GM (Game Master) rolls a 1, then it grazed you. If they roll a 4, you got bonked pretty hard.

What are my life points? Think of it like your Health Bar from a video game. Every time you’re injured, you lose some health. When you get to zero “Life Points”, your character is dead, and you have to create a new one while the other characters divide up your stuff. The GM can decide if you can join the part in mid-expedition as a new character appearing out of the jungle mists, back at the beginning, or wait for a new game.

Ok, so you’ve gotten a really basic set of parameters on how the game is played. As you create your character and outfit them for the adventure ahead, the rules will start to make more sense. The more you play, the easier it gets. We’ve game tested this with individuals as young as eight years old and as old as seventy-nine. Each was indispensable in helping to build what you see before you and had a great time in doing it.

Are you ready to let your imagination run wild and brave The Island? Let’s get started!